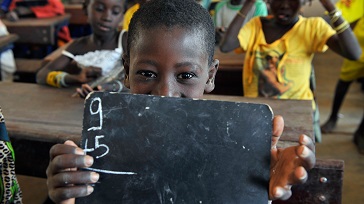 Far too many children, adolescents and youth (264.3 million) are currently out of school due to a number of factors relating to their living conditions, financial constraints and social adversities. Education is a key to end this roadblock, escape poverty, end child labour and lead a life of dignity. However, a lot needs to be done to improve access and inclusion of children in mainstream education, especially the most vulnerable and marginalised such as children in child labour and slavery.

Estimates from the World Inequality Database on Education suggest that, in lower-middle-income countries, children from the poorest 20% are eight times as likely to be out of school as children from the richest 20% (UNESCO, 2017b).This means that it is mainly the poor that miss out on schooling the most, and are thus pushed into exploitative and slavery like conditions. Thus to ensure that children from the lower and middle income countries and poor households in even the developed world do not miss out on their right to education, the direct costs of education to families need to be eliminated. Moreover, in many countries reducing the indirect costs of education is also critical through cash transfers, scholarships and incentives to students. An impact evaluation study by UNESCO on 19 conditional cash transfer programmes operational in 15 countries showed that attendance increased by 2.5% in primary schools and by 8% in secondary schools. These programmes have a stronger impact when they are combined with grants, infrastructure or other resources for schools.

Education provides people with knowledge and skills that increase their productivity and make them less vulnerable to risks. On an average, one year of education is estimated to increase wage earnings by 10% and in sub-Saharan Africa by as much as 13%. It is also said that workers with secondary education are more likely to be employed than youth and adults, with only primary education. Thus it is important to note that completion of secondary schooling is thus vital to increasing growth and reducing inequality and poverty.

Education is also said to increase resilience, as it prepares individuals to cope with risks for themselves and their family members throughout the life cycle such as health epidemics, conflicts and natural disasters. Given that currently 35 countries across the world are conflict and disaster ridden, ensuring children in these countries do not miss out on education is highly critical. Studies show that increased secondary education in Asia can especially have a strong impact on the predicted global pattern, as the continent is home to some of the largest populations, many of whom reside in coastal areas where most disasters occur (UNESCO, 2016).

Education also empowers girls and women and gives them more opportunities to make choices. It can boost their confidence and perception of freedom. It can also alter the perceptions of men influencing gender stereotypes and decreases incidents on gender based violence. It further protects young girls and boys, as well as men and women from exploitation in the labour market, for example by increasing their opportunities to obtain secure contracts. In urban El Salvador, only 7% of working women and men with less than primary education had an employment contract, leaving them very vulnerable. By contrast, 49% of those with secondary education had signed a contract (UNESCO, 2014a).

Therefore, as global primary out-of-school rate has remained stubbornly at 9% for eight years in a row, it is time that the governments commit to investing more in the education sector and accelerates the efforts to increasing access to quality, inclusive and equitable primary and secondary education. With MDGs taking lead in promoting primary school enrolments, the Sustainable Development Goals (SDGs) play an essential role in moving beyond primary education and focus on attainment of secondary education as it clearly suggests from the examples above, that it could halve global poverty-which is one of the leading factors of pushing children into child labour and making them vulnerable to getting trafficked into labour and sexual exploitation.

On this International Literacy Day, Global March is thus committed to promote education for all and aims to use it as an effective strategy to end child labour along with providing sustainable community based solutions and mass awareness raising on the importance of education.

We are all for education for all. Are you?