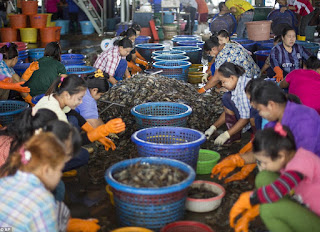 In recent years, those concerned with the issues of trafficking, forced labour and slavery have begun to focus on supply chains as a new arena of action with a focus on girls and young women. Millions of people including women, men and children continue to toil in forced labour for the private economy that reaps some $150 billion in profits each year (ILO report, Profits and Poverty: The Economics of Forced Labour , 2014).Thousands of goods and services bought and sold every day are touched by modern-day slaves, in particular girls and young women who are not only the most vulnerable to being exploited, but also comprise of the most invisible labour in global supply chains.
Girls and young women working in global supply chains such as in the garment and seafood industry are most at risk of being victims of unfair practices, violence and slavery.  Factors such as the large mixed movements of refugees and migrants, as well as conflict and natural disasters, often create an environment for trafficking and slavery. Traffickers often use sexual violence and physical abuse in addition to debt bondage to compel labour, in particular towards girls and young women.

The key issues in addressing the problem of trafficking of girls and young women within the global supply chains are –
In order to address these key issues for the prevention of trafficking of girls and young women and their forced recruitment in the global supply chains, it is essential to look into the trafficked workforce “hotspots” and situations such as high levels of migration.  In the era of globalization and mass production, the developed countries look out for cheap labour from the ‘backward’ economic zones such as South Asia. As industries become more competitive, it creates circumstances for employing the migrants who are often trafficked for labour exploitation. For instance the readymade garment-manufacturing sector in Bangladesh accounts for over 80% of the nation’s export earnings, has around 4 million workers, with an estimated workforce of 55-60% [1] girls and young women and ample evidences of forced and child labour. Many workers comprise the migrant population with boys and girls of all ages often voluntarily working or being trafficked.

While trafficking, forced labour and other forms of slavery in the garment sector in global supply chains, has long been an area of concern, seafood industry is one of the most overlooked area and at the same time one of the most precarious sectors to work in. Estimates from countries such as Bangladesh and Philippines- that are a source, destination and transit country for girls and young women subjected to sex trafficking, all indicate instances of child and forced labour in fisheries with frequent reportings of  of sexual abuse, labour law violations and children engaged as swimmers and divers, often working for nine hours without a break in extremely unsanitary conditions.

According to the 2013 Philippine Fisheries Profile, Philippines ranks seventh among the top fish producing countries of the world. With a history and present consisting of trafficked and migrant workforce, there are also reports of girl child labour working in the processing plants at shrimp processing, freezing, and packaging factories. Young girls and boys are often forced to become fishers or fish workers, leading to disruption in their education. While young boys are employed to fishing and swimming in the dangerous waters, young girls work in the cleaning and packaging of the seafood that enhances their invisibility even more. The seafood industry is one of the most significant industries for trade between many South Asian and South East Asian and Western and European nations. The complexity of its supply chains ignores where its major chunk of workforce is coming from and instead focuses on the product, which is a concern for how accountable the supply chain process is. For instance, many seafood companies’ certification of the product is based on the quality of the product but not on its labour laws and recruitment policies. Supply chain accountability for industries such as the seafood with extended global supply chains is therefore extremely crucial to a company policy on human rights and ethical sourcing.

No industry or region is fully insulated from the social deficit which has emerged
from the rise of the modern global economy, and all leading multinational corporations have come to recognize the risks associated with ever-expanding supply networks. Thus, for businesses to be able to adequately identify and address the issue of trafficking of girls and young women it is important build the understanding to plug the knowledge gaps of human trafficking, forced and gender related issues of the geographical region of the workforce. A close co-operation with local stakeholders, such as NGOs and CSOs, is of crucial importance to understand where they are forced to work and why the conditions lend themselves to human trafficking. Understanding the local complexities of the geographically fragmented garment and seafood industry, where cultural notions may also be used to justify the curtailment of women and child rights, the local stakeholders can play a major role in mainstreaming gender in the prevention strategies of trafficking, focusing on the protection of girls and young women.

Global March thus aims to encourage companies to take trafficking seriously not only for moral or ethical reasons, or for them to see it as a ‘risk’ for their companies but as an overall responsibility towards their product and the people involved. The absence of a responsible approach combined with the incapacity or unwillingness of foreign governments to protect the rights of girls and young women and their vulnerability created by poverty, inequality and discrimination is the biggest threat to achieving sustainable gender equality. We need to collectively act for the well being and livelihoods of young girls and boys and address the issue of trafficking, forced labour and slavery within a wider context of labour rights and working conditions. We also need to be clear about who is facing the greatest risks: it is workers, not corporations, but the onus to mitigate the risk lies with the latter.

Thus, if you as a reader own any company yourself or work in a manufacturing company, why not take a peep into your company’s supply chain and see who is producing the actual product? If you were in the shoes of the workers, will you be able to take all that they are enduring? What can you do in your capacity to protect the workers from exploitation, trafficking and child labour? These are the questions you must ask yourself today, tomorrow and every day!


[1] https://www.unicef.org/csr/files/CSR_BANGLADESH_RMG_REPORT.PDF
Posted by Unknown at 00:18